How do I know when I should upgrade my car's electical system?

It’s not just a matter of ensuring that there’s enough juice for your stereo, but also making sure that every other part of your vehicle is still able to receive ample power, without sacrificing performance or bottlenecking your audio experience.

Depending on your stock alternator and the electrical needs of your vehicle, there may or may not be enough leeway to upgrade your audio equipment without having to upgrade anything else.

Let’s start off by going over the very basics of electricity in the context of your car and your car’s audio system, and then we’ll reveal when it’s time to think about adding a second battery or even installing a high-output alternator, along with a couple of other options. Your vehicle’s battery feeds a jolt of power to your starter, which starts your engine. Your battery also providers power from the alternator to things like lights, turning signals, power locks and windows, and your stereo. Your alternator works to recharge your battery so that it’s ready to get you started next time you turn the key.

When should you upgrade your battery or alternator?

Here are a few tell-tale signs that it is time to upgrade your car’s alternator to something that can output enough power to meet the demands of your stereo:

If you’re only seeing these issues at very high volume, one solution is simply to turn the volume down until the problem stops. Then ask yourself if that’s an acceptable volume for you to listen at happily. If so, you’re all set. If not, there are still solutions, they just aren’t quite as simple.

Big 3 Upgrade: Upgrading the wires under the hood know as the Big 3 Upgrade can provide you with a little extra juice when the going gets tough. If you only experience headlight dimming and other issues at higher volumes when the bass kicks in, then this could be the ticket. That little extra bit of increase power can help to smooth things out, but it’s not always enough, especially for powerful systems at deafening volumes.

Upgrading to a bigger alternator: If you’re experiencing dimming lights and other issues even at lower volumes, your system is underpowered and it’s time to look at an aftermarket alternator.

Adding an extra battery: The extra battery gives you more reserve capacity (ampere hours), and this is an option if you don’t have room for a larger battery under the hood. You can put the second battery in the trunk next to your amp.

Upgrading your battery: If you physically have room under the hood to replace your OEM battery with something larger, that’s the easiest way to go about increasing your ampere hours. This will allow you to play your stereo system for a longer stretch of time while your engine is not running, before having to start your car to allow the alternator to charge the battery back again.

The good news is that you can’t really overdo it when shopping for an aftermarket alternator, so you can do some quick calculations to figure out roughly what you’ll need, and then overshoot that by a bit, and you’ll be good to go.

The easy way to figure out how powerful your aftermarket alternator will need to be is to do some rough napkin math. Your car’s owner’s guide should tell you the maximum amperage of your alternator, and you can get the actual current reading using a multimeter.

You’ll want to multiply that number by the voltage of your battery which is typically 12.6 volts, but increases to 13.7 volts or more when the engine is running. The result of that multiplication is a number in watts. Before adding a stereo system, most vehicles will need roughly 50-100 amps to power things like air conditioning, fog lights, dash cams, GPS, and more. From there, you can see how much room you’ll have leftover. If we run the same calculation, but we allocate 70 amps for the vehicle’s accessories (which gives us 200 amps * 13.7 volts), we’re left with 2740 watts of power to play with. Remember, this isn’t an exact calculation, so it’s not the greatest idea to cut it too close.

Your car stereo isn’t always going to be drawing the full amount of power , and you’ll also need to take into account the efficiency of your amplifiers, if you’re mostly going to be listening to music while you’re driving, or idling, or parked with the engine off, and more.

It’s a good idea to go over the numbers with the shop that’ll be installing your alternator for you, or the manufacturer if you plan on installing it yourself.

If you don’t know exactly what you’re doing, including all the important safety precautions that aren’t always obvious, then you shouldn't think of this as a simple DIY project and you should hire a professional. You’re dealing with high powered electricity and zero margin for error. This isn’t like wiring in a new stereo deck or replacing a set of speaker drivers. 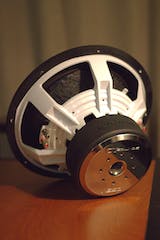