CT Sounds engineered the CT-80.4AB Full-Range Class AB Multichannel Car Amplifier for anyone in need of a powerhouse amplifier that fits just about anywhere in your vehicle and won’t destroy your wallet. If you want to do 70 mph down the highway with the windows down and still have crisp and clear sound over the wind noise then look no further.

This multi-channel amplifier features a Low Pass Filter (LPF) and Subsonic Filter so you can get the exact sound you are looking for out of your amplifier. The MOSFET power supply and proprietary heat dissipation design will ensure that the amplifier runs cool for even the most demanding playlists. Furthermore, the compact chassis and small footprint make it easy to install in any car audio application.

You can sleep easy at night knowing your amplifier is protected from damage due to the amplifier's uniquely engineered protection circuitry featuring high voltage, low voltage, over current, and high-temperature protection.

My truck is insane! Thanks guys!

To be honest, I never had a matching set of amps, especially not in the amp class circuitry configuration,
That sounds so amazing, I have had smaller and bigger systems, more budget+more expensive, and even 3 dB Drag competition SPL VEHICLES, built about a dozen,
In the 20+yrs I've given to car audio CT Sounds *PRICE PER "QUALITY" WATT*.... IS NOT SURPASSED....
It's actually laps ahead, with no one even creeping close (behind)
This is my "Budget Build" since my big build got put on hold do to SUV being totaled while parked by dumb drunk driver...
But if that didn't happen, I wouldn't have had the use for/a reason, to try out

Super glad I did...thinking about getting some OZONE 10"s to replace the 10"s I have now, which are also 800rms each, but CT Ozone resonant frequency is like 8Hz lower than my Audio Legion Gladiators...
And they're still not out of "budget" territory 👍💪🤘🤘💪👍 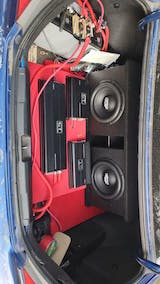 When I opened my box it was packed good and tight with the other products I purchased. I am going to be using this amp for a wagon build I am working on for my youngest son. I haven't installed it yet but the compact size will help with the limited room I do have for the electronics.

The amp doesn't get hot and pushes 4 strato 6x9s and 2 tweeters no problem,they sound crystal clear and scream ,I can't wait to hear the 6.5 3way componentss on the 150.4 💯💯

Subscribe to get special offers, free giveaways, and once-in-a-lifetime deals.

*By signing up, you agree to receive marketing text messages from CT SOUNDS at the number provided, including messages sent by autodialer. Consent is not a condition of any purchase. Message and data rates may apply. Message frequency varies. Reply HELP for help or STOP to cancel. View our Privacy Policy and Terms of Service.

I bought these speakers to replace a pair of kicker 6.75" speakers that blew after a month. These speakers sound amazing, and with a 250rms, I don't have to worry about damaging them. If only CT made a 250rms 6x9 speaker ...hint hint 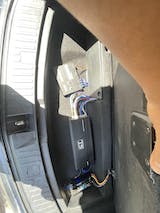 My truck is insane! Thanks guys!