Engineered to be the best in its class, the amplifier uses an advanced PCB board featuring industry-leading capacitors, MOSFET pulse width modulated power supply, high-quality transformers, and cutting-edge inductors. The amplifier comes equipped with a 4-way protection circuitry along with reverse polarity protection.

The plexiglass backing, illuminated LED CT Sounds logo, and white chassis give this amplifier an unbeatable appearance. Variable adjustment controls feature gains, subsonic, bass boost, low pass filter, and phase settings so you can get the exact sound you are looking for out of your amplifier. Included with the amplifier is the highly demanded AT Series On/Off Bass Knob which not only lets you adjust the bass boost but also displays your system voltage.

I’ve owned every AT series amp except for the AT 7000 and loved every one I had never once had a failure with anything I’ve owned from CT Sounds the quality speaks for itself, this 3000.1 is no exception it has better Korean parts in it not built there but has some the hardware from what I’ve been told it must have cause it has performed flawlessly, it’s big beefy and solid Dyno I saw on Trevor moons page had it pushing over 3900 watts RMS at 1ohm not often you hear of an amp doing almost a 1000 watts over rated power! I have it pushing a Sundown X15”V3 Series sub in a spec built 13 ply Russian Baltic birch labyrinth ported enclosure by Drew Jones it pushes that sub like a boss the sun can take a more power but no need the 3000.1 Has my sub flexing like a trampoline, and sounds killer, ive run this amp on multiple 5 hour drives to florida from louisana and back and it hasn’t missed a beat or gotten hot it warms up never gotten hot amazed at how cool it runs for an amp that size with no fan on the board, it is a very powerful well built amp, clear backplate Tiffany style RCA’s gotta love that white color and the blue lights are still cool to see at night, and does almost 1000 watts over rated power is crazy cool, CTSounds FTW! 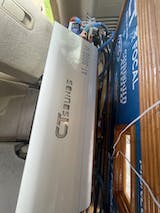 I have two 12 inch evl subwoofers that are rated at 1250 each but they want a lot more I got this amp to replace the jp 23 which was 2000 watts and they bang ALOT harder now but still want more. Surprisingly the at v2 amp isn’t as hard on my electrical as the other one which was less power. Love the bass knob with voltage display and turn on/off. Definitely the best amp I’ve had so far.. Ct sounds is really underated I wouldn’t be surprised if this amp was pushing 3.5k easy if you have the electrical to back it.

M
Miguel
They do the job

Am really impressed with the power it gives

Subscribe to get special offers, free giveaways, and once-in-a-lifetime deals.

*By signing up, you agree to receive marketing text messages from CT SOUNDS at the number provided, including messages sent by autodialer. Consent is not a condition of any purchase. Message and data rates may apply. Message frequency varies. Reply HELP for help or STOP to cancel. View our Privacy Policy and Terms of Service.

Hands down the best amp I have had this thing is a beast can’t wait to buy another one and strap them. You will not go wrong with this amp.

I have the AT 1400.1 the AT 60.4 and absolutely love them. Only regret is I didn’t buy Ct sounds components or subs I will be buying subs and components and another amp as soon as I can afford it.

I haven’t installed them yet,but once i get a chance I’ll let you guys know 🤘🏽